Exotic lab-grown meat, such as tiger steaks and lion burgers, could soon be available in Britain under the ambitious plans of a food tech start-up.

London-based Primeval Foods wants to hold tasting sessions at Michelin-starred restaurants across the city to show off its “grown” products, which are derived from animal cells and far less harmful to the environment.

Company founder Yilmaz Bora says the reason beef and chicken are so popular is that the animals the meats come from are the “easiest to domesticate”, rather than being chosen for taste and the nutrients they provide.

He said that by extracting the cells of exotic animals such as giraffes, elephants and big cats, meats that most people had never tried before could soon find their way onto supermarket shelves, meanwhile regulatory approval.

Primeval Foods also admits that one of the biggest obstacles to the cell farming industry is the cost of producing meat, although scientists are working on new methods to speed up and reduce the cost of this process. 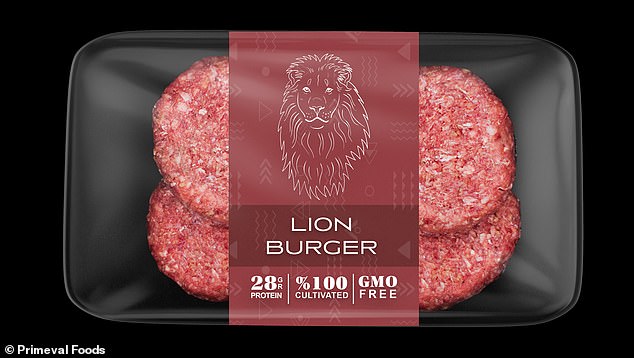 London-based Primeval Foods wants to hold tasting sessions at Michelin-starred restaurants across the city to showcase its ‘cultured’ products, which are derived from animal cells and are far less harmful to the environment.

WHAT IS CELLULAR AGRICULTURE?

Cellular agriculture is the production of food of animal or plant origin from cell cultures.

It is often touted as a more sustainable and ethical way to generate animal or plant protein for human consumption.

Animal insulin could be considered the first product of cellular agriculture, created in 1922 – an achievement that won the Nobel Prize in Physiology or Medicine the following year.

Just last week, Israeli company Aleph Farms – a market leader in the cultivation of lab-grown beef steaks – was part of the Axiom Space mission to launch bovine cells to the International Space Station.

Three wealthy businessmen, who became the first all-civilian crew to launch to the orbiting observatory, will conduct a series of experiments, including trying to grow animal cells in space to make steak.

Bora said cultured meat offers the nutritional and sensory experience of real meat without the negative elements of cholesterol, saturated fat and “nature and animal expense”.

“Cultivated meat will stay and grow because it is not an alternative to traditional meat; it’s an upgrade,” he added.

“If we want to have a meaningful and lasting impact, we need to target carnivores rather than vegans.

“Cultivated meat offers the opportunity to reach a whole new demographic, as some people will never give up eating meat despite its negative impacts on the environment, health and animal welfare. 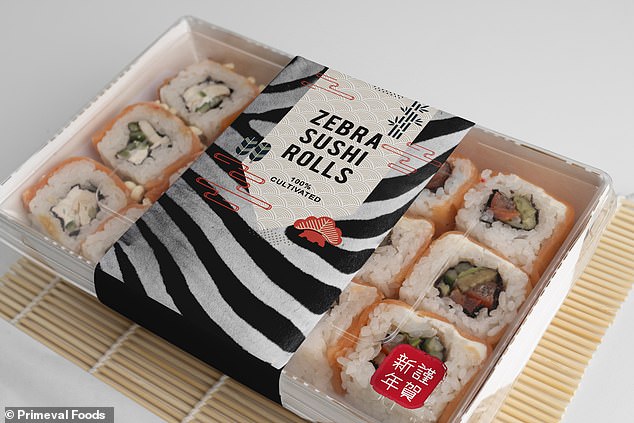 Company founder Yilmaz Bora says the reason beef and chicken are so popular is that the animals the meats come from are the “easiest to domesticate”, rather than the taste and nutrients They provide. Primeval Foods also plans to sell zebra sushi rolls (pictured)

HOW WILL ASTRONAUTS GROW STEAK ON THE ISS? 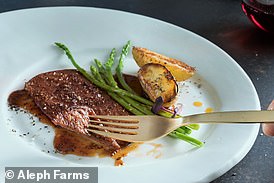 Bovine cells from cows were transported to the International Space Station aboard a SpaceX Dragon spacecraft.

It is part of the Axiom 1 mission, NASA’s first-ever space tourism mission to the ISS, which will see three amateur astronauts spend eight days aboard the orbiting observatory.

The bovine cells will be inside a credit card-sized chip, embedded in a system of pumps the size of a shoebox.

They will then undergo a process of multiplication and diversification in microgravity, with the goal of growing muscle tissue that could then be used to create lab-grown steaks.

The company behind the idea is Aleph Farms, a market leader in technology.

Thanks to cell biology and tissue engineering, it is possible to grow only muscle and fat tissue, which is what humans eat when they consume meat from an animal.

There is no waste in the form of bones or organs.

Scientists provide cells with the same inputs they need to grow, just outside of an animal: nutrients, oxygen, moisture, and molecular signals from their neighboring cells.

So far, researchers have grown clusters of cells that can be turned into processed meat like a burger or sausage.

However, the company hasn’t revealed when that might be.

Scientists say the overall environmental impacts of cultured meat production are likely to be significantly lower than those of conventionally produced meat, although no direct comparison is possible because cultured products are not yet produced at the industrial scale.